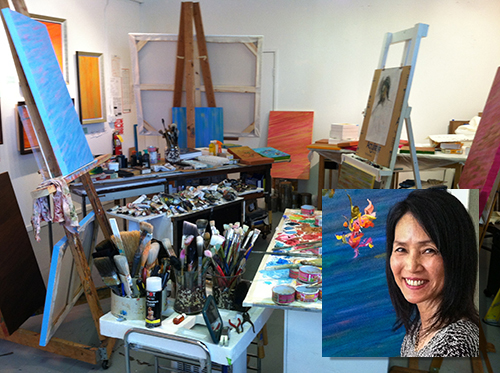 Reiko Muranaga [Pronounced: lay•ko]
When I was in high school in Tokyo, I had to choose between art or music. I chose art only because I was frightened to sing in front of others. I became bored with art class. During outdoor sketching, I watched ants move busily near where I was sitting or read a novel hidden under my sketch pad. I hardly turned in my assignments. I nearly flunked.

I moved to USA in my twenties, lived and went to school in the midwest for as a German major. I then studied at Hamburg University in Germany on scholarship. I began to write a series of essays including an art critique. The latter won me a national prize from a small literally magazine. I planned to be a writer. After some life-changing events during 1987 - 1989; one day, out of blue, I had the urge to draw. I joined Fort Mason Art Center's drop-in life drawing classes, paying only $3 per 3 hour session, while working as a trilingual technical interpreter. Nine months later, after doing over one thousand drawings, I was accepted at Stanford University's non-matriculated graduate program with my portfolio of half a dozen figure drawings. I knew neither the difference between oil and acrylic nor who Nathan Olivera was until I went to the Bay Area Figurative Artists exhibit at de Young Museum.

People ask about my inspiration or how I plan my work. I neither have images nor plans when I begin. Perhaps I work like a musician; adding, modifying, changing, and often deleting scores. I do it with my brushes and palette knives. I then find that, without consciously planning to finish the piece, at some point it is done. I am always fascinated when experiencing deep connections with viewers, especially through what is defined “abstract”.

I owe much of who I am today as a painter to my mentor, Nathan Oliveira, whose insight and inspiration encouraged me to go beyond convention. In addition, I could come all the way here only because of the love and support I have been receiving from my collectors and fans.